LINGENFELTER COPO BATTLE AT THE GREEN

Former NHRA national event finalist Emily Volkman drove her ’15 COPO Camaro to the Lingenfelter COPO Battle at the Green victory with a final-round decision over Brian Palcisko. Palcisko had the slightly better reaction time, but Volkman was closer to her dial with a 9.20 on a 9.17 dial opposite his fast-closing 8.92 on an 8.80.

With a consistent string of runs within just hundredths of a second of 9.20 all day, Volkman defeated Bowling Green’s Donnie Bray, recent NHRA divisional event winner Daren Poole-Adams, and, in the semifinals, Jim McLeod, who narrowly red-lighted. Poole-Adams paced all qualifiers with a .019 light. 1986 NHRA Stock world champion Al Corda was No. 2 with a .023, Holley Director of EFI Business Development Robin Lawrence was third with a .026, and Volkman was fourth with a .041. 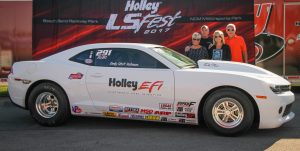 Josh Elam dominated the Frankenstein Engine Dynamics Late Model Heads-Up competition from beginning to end, starting in qualifying, where he outran the field by more than half a second and 12 mph. Elam, at the controls of an ’09 Corvette, clocked an outstanding 8.86 at 163 mph, and ran even quicker and faster in eliminations.

With an odd number of entries in the 13-car field, Elam was awarded a single in the first of four rounds of eliminations. He lifted early for a parts-saving 9.76 at 112 mph, eased off in a quarterfinal win over Chicago’s Johnny Matney, 9.66 to 10.82, then poured the coals to it in the semifinals against the similar ’08 Corvette of Mark Cook. Elam pounded out low e.t. and top speed of the meet – an 8.54 at 164 mph – to cover Cook’s 10.57/139, then cruised to a 9.01/163 in the final against Lester Miller’s Arkansas-based ’10 Camaro. Lester defeated Bradley Maynard, Jeff Nance, and Rodney Booth to reach the finale. 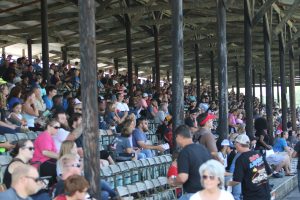 Darren Morris of nearby Bardstown, Ky., plowed through six grueling rounds to drop Robert Strong for Sam Tech Street King honors, clicking it early for a coasting 11-flat at 102 mph in the final round when Strong, of Pensacola, Fla., red-lighted. Strong, at the wheel of an ’87 Monte Carlo, missed the green by just 39-thousandths of a second. 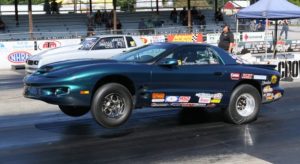 Scoggin-Dickey Parts Center Chevrolet Performance Stock was the domain of Muncie, Ind.’s Jesse Wilson, who won a showdown between the top two qualifiers in the all-Camaro final. Wilson led all qualifiers with a 10.09 – the only run in the 10.0s all weekend – and Haley Rounsavall was right behind him with a 10.14 and just ahead of Kevin Lumsden’s 10.17.

Wilson also had low e.t. of all three rounds of eliminations – but not by much. He clocked at 10.12 in the first round, just ahead of Rounsavall’s winning 10.15 against Keith Vaughn and Lumsden’s 10.18 over Scotty Duncan. All three ran 130 mph. In the semifinals, all three winning times were in the 10-teens, with Wilson’s 10.14 the quickest, and in the final Wilson unloaded low e.t. of eliminations, a 10.12, to ice Rounsavall’s clutch .016 reaction time and 10.60. 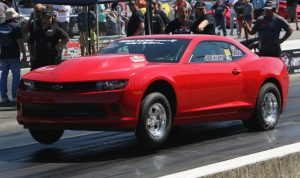 Elk Grove, Ill.’s Anthony Manna ruled the Nitro Gear Drag Radial category, which was contested on the eighth-mile. Strapped into a ’98 Camaro, Manna had some of the best reaction times and by far the fastest car of every round, running within a tenth of a second, from 4.53 to a 4.62, in all four rounds of eliminations.

Hometown racer Jessie Coulter had Wiseco Real Street all the way with excellent reaction times and amazingly consistent passes round after round. After qualifying on top with a 4.67 (eighth-mile) that held up all weekend as low e.t., Coulter drove his ’91 Camaro to victory to four consecutive round-wins with times that varied by just two-hundredths of a second (4.72-4.74) and speeds that varied by less than half a mile per hour (151.95 to 152.33 mph).

Nicholas McGrath qualified behind Coulter with a 4.73 and established top speed for the weekend with a 152.42-mph speed on that run. With the next-best runs of every round behind Coulter’s barrage of 4.7s, he advanced to the final, where his E.T. and speed were almost identical to Coulter’s (4.747-4.754 and 152.21-152.02) but were nullified by a red-light start.

Mike Morris, father of Sam Tech Street King winner Darren Morris, outdueled the biggest field at LS Fest – Three Pedals Rumble, which is open to all vehicles powered by an LS-style or current-generation LT powerplant except dragsters, roadsters, and altereds. Wheeling an 11-second ’57 Chevy, Morris, of New Haven, Ky., dialed 11.25 for all seven rounds, culminating in a final-round matchup against Jackson, Tenn.’s Matt Brasfield, who was dialed at a 12.25.

Morris, who had his best reaction time of the event, .028, in the semifinals, was a winner before he left the starting line when Brasfield cut the lights a little too close for a -.031 red-light start. On the way to the final, Morris knocked out Joe Hammann’s ’65 El Camino, Steve Criss’ ’10 Camaro, Paul Lewis’ ’04 Pontiac, Charlie Polly’s ’15 Chevy SS, and Robert Farley’s ’98 Corvette.

Chris Bishir ruled the True Street division with by far the fastest runs of the event, guiding his powerful Chevy S-10 pickup to amazingly consistent times of 8.84, 8.62, and a best of 8.58 for an 8.68 average and a train-length win. Justin May was runner-up with two 8-second passes and a 9.04 average, faltering only on his second of three runs, a 9.58. 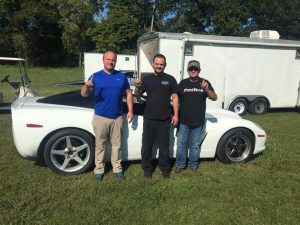 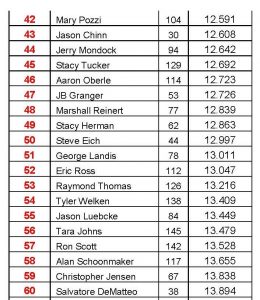